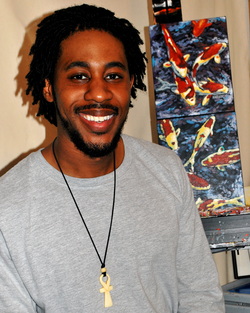 Born and raised in Detroit, MI, Christopher Batten has had a profound interest in Visual Art since the age of four.  After completing an extensive college preparatory Visual Arts program at Detroit’s Cass Technical High School, Christopher went on to study at the Columbus College of Art and Design.  He later completed his Visual Arts training at Detroit's College for Creative Studies, graduating with a BFA in Illustration Spring of 2006.  Batten began his career as a Fine Artist in 2007.  Exhibited nationally, his works have appeared in the National Black Fine Arts Show,  Embrace (an exhibition associated with Atlanta's  National Black Arts Festival), the Charles H. Wright Museum of African American History, and Red Bull House of Art Detroit, among other venues.  Aside from being a studio Artist, Christopher is a live painter, art educator, and muralist.  Christopher is currently an MFA candidate at Maryland Institute College of Art's, Leroy E. Hoffberger School of Painting (C/O 2017).  Overall, Christopher aims to use his work as a means of triggering thought and subsequent change.

Visual Art formulates a vast majority of my existence. I believe through this mode of expression, one can reflect and shape the world around them. Also, as an Artist, I believe that if one can shape their world, it provides symbols that they are on the road to self-discovery. Therefore, my emphasis is to engage the viewer into going deeper onto the road of self-discovery. In the process, hopefully the viewer will find, by looking at and/or studying my art, that self -discovery leads us to who we really are; spiritual beings.

With the use of Acrylics, Oils, and (sometimes collage) I am able to bring forth multifaceted aspects of a person that provoke and/or invoke insight into our spirituality. My current style involves the use of traditional painting techniques, iconography, and symbolism as a means of conveying a narrative to the viewer. Through use of symbols (both familiar and unfamiliar), in conjunction with the figure, I aim to educate the viewer on something new or deepen their understanding of things they may have previously recognized about themselves or society at-large. My work encourages the viewer to embrace a true “humanity”, or recognize that which makes us all relative; our inner being.

Another major staple of my work is vivid color. As an avid fan of Art History and Visual Art’s basic principles, I’ve discovered color adds a connotation of its own to a given piece. Through experimentation, I’ve found that the color of any object is based on the old scientific principle of ROYGBIV. When this principle is applied to the human figure, (specifically in the manipulation of skin-tones) one discovers that we are all slight variations of the same colors. Vivid color is incorporated to generate a conceptual warmth and relativity to my portraits (regardless of the ethnicity of the subject portrayed). As a result of the color being exaggerated, the viewer is encouraged to look past race or creed. In effect, the notion of “everything is everything” is left with the viewer. Overall, my art symbolizes that we are nothing more than just a prism, with the vividness of our spirit depending solely on how we allow light to shine through us.